The Association promotes the ACTC Classic Trials Championship; first introduced in 1984, the Championship consists of a number of events which registered contenders are invited to enter. Additionally ACTC contenders are occasionally invited to events outside the championships. Six different Championship tables are run – a contender will score points automatically in those tables for which he or she is eligible.

The Wheelspin League: car contenders score points based on their overall position relative to other cars in the trial. Scoring is from 10 points for first down to 1 point for tenth.

The Crackington League: car contenders score points based on their position relative to other cars in their class. Scoring is from 10 points for first down to 1 point for tenth, together with a decimal point amount for the number of starters in a class, thus attempting to level different sized classes.

Navigators League: passengers who register with ACTC score points relative to the score of the driver they are accompanying on the same basis as for the Crackington League.

The Pouncy League: for solo motorcycles and Red Rose Bowl for sidecars and three wheelers: motorcycle riders score points based on their position relative to other riders in their class. Scoring is from 10 points for 1st place down to 1 point for 10th.

The MCC reliability trials are scored on the basis of the award won – 5 points for a Gold or higher award, 3 for a Silver and 1 for a Bronze.

A driver or rider registering with ACTC will automatically receive regulations for all events which form part of the Championships and may receive notification of other events to which ACTC has been invited. 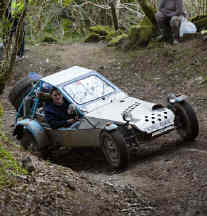