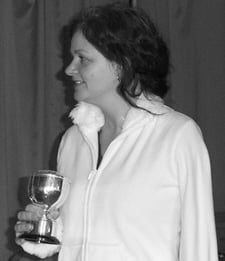 Coupe Des Dames
Gina Mallett. Although you will not often see Gina in the list of trophy winners, she does a lot of West Country events in her Escort and more than occasionally returns some good results, in spite of the fact that see is obliged to use an automatic gearbox in her car.

Rest & Be Thankful
Jane Marfell. Jane did not do as many events as usual in 2002, as she chose to have a baby half way through the season, but in spite of this handicap, she continued to “drive” Adrian’s championship efforts from the back seat. Turning out whenever she could, tolerating Adrian’s long nights in the workshop every weekday. Less than a month after giving birth, she was back in the left hand seat, which having had that dubious pleasure myself, I can say was quite brave!!

Wait Until Next Year
David Dyer. It may seem to some that David has been around the scene for some time, but this is just a blind caused by the absence of events in 2001. Although a newcomer to our sport David is not a stranger to trials having successfully misspent his youth on two wheels. He has taken to the ex Bradshaw Cannon like a duck to water and seems poised to take one of the major pots this year.

Tractor Tug
Colin Perryman. The Skoda crews all call him the driveshaft king. He seems to have spent the entire year lying in mud swapping this things. I’m sure he’s driven the odd hill in  between, but I’ve never seen him doing anything else!

Trial of the Year
Hardy. In spite of their winning “Motor Club of the Year” in previous years, Woolbridge Motor Club’s trial always seemed to be in the doldrums.   This year, it all seemed to gel, and in spite of their claiming that nothing significant had changed on the organising front, this year’s event had that certain something that made you think “That was a good event”. No one thing in particular, but clearly the right thought on things like section layout, the route, and so on.

Mike Massey
Bill Bennett. Most champions achieve that status by blinkered concentration of that goal. Bill managed to do it all with a cheery smile, and in addition, when asked to assist with the Association’s stand at the Classic Motor Show at the NEC in November, he not only took over the entire organisation, but dedicated his entire long weekend to the running of the stand and put on our best show yet.

Premier
Adrian Tucker-Peake. With almost the entire front wheel drive class taking home the major trophies, it was clearly a FWD year, and therefore Adrian takes the trophy for proving that you don’t have to have a Golf GTi to win