Here are a few short notes about the 1998 recipients. 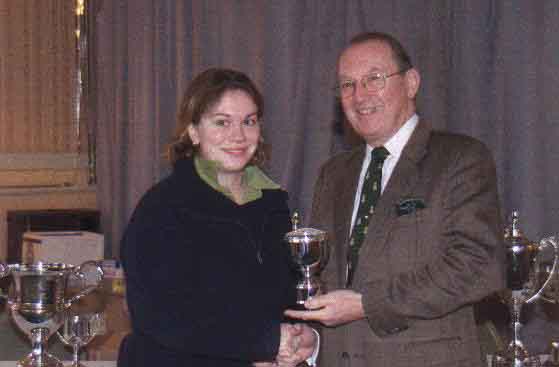 Tessa Alcock impressed us all with her spirited handling of the big Beetle, I personally watched her determined attack on Hungerford on this year’s Clee Hills trial, she is going to take some stopping again in 1999! Gillian Haywood in the MGB will certainly be giving Tessa a run for her money this year and we can expect some fireworks from Emma Flay and Hazel MacDonald, both of these ladies are ‘fast tracking’ into the driving seat thanks to their expert coaches!

Rest & Be Thankful Trophy
Up until 1998 the preserve of the car bouncers but now we have the Pouncy league to consider and were unanimous in rewarding the efforts of David Jones in crewing Keith Lee’s big Norton Wasp outfit so competently during the year. The passenger on a trials outfit contributes even more to the success or failure of the effort than a good car passenger does.

Wait until Next Year Trophy
Often jokingly referred to as the kiss of death, it is genuinely awarded to a competitor who the officers feel is destined for stardom in the coming season. Ironically over the years a number of its recipients have never been seen or heard from again! Let’s hope that 1998 recipient, Anthony Andrew, another big Beetle driver; is able to build on his 1998 Exeter trial result and Crackington Cup scores to break the jinx.

Tractor Tug Trophy
We didn’t award this one in 1998. Standards of preparation are definitely improving and there were no real hard luck stories springing readily to mind.

The Moore Trophy
Once again Peter Treliving took top pre 1941 honours in the Austin Seven. Come on you MG boys and what about side valve Pops? Peter will relish an even stronger challenge.

Trial of the Year
(The officer’s views are supplemented by the observer’s reports when arriving at the final decision for this award) Bristol MC & LCC’s Allen took the trial of the year again. Always very well organised with great attention to detail although the format remains unaltered. It works, so they elect to keep it the same. There was a very strong challenge from MAC’s unique Manx trial, a superb event, very well organised and a thoroughly enjoyable weekend. Let us not overlook the difficulties in organising an event at arms length, not to mention ‘overseas’! In the final vote Bristol just pipped MAC.

Mike Massey Memorial Trophy
No dissenters on this one, Brian Osborn was the unanimous choice from the outset. Brian is an absolute stalwart of Classic Trialling, he perseveres with the MGB because he is an MG fanatic and just loves taking part in our events. I doubt that it would ever cross his mind to enter anything other than an MG! He is truly a sportsman in the mould of the late Mike Massey and also a tireless worker for our sport. Brian was instrumental in arranging for the ACTC stand at the NEC show; his efforts are much appreciated.

The Premier Trophy
Adrian Tucker-Peake carries a family name synonymous with the sport of classic trialling. His own competition history spans back a good few years now having successfully campaigned his late father John’s famous Runner Bean’ Ford Pop trials special saloon. Adrian broke off from the sport a few years back to pursue his career in North America. Of course it could have been the hair-raising experience of passengering in ‘Shorty’, which prompted him to leave these shores! Whatever, he has returned to Mother England and rejoined the trials scene at the wheel of a FWD Peugeot 205 to great effect