Many of the ‘older’ motoring enthusiasts or the younger ‘anoraks?’, (I probably fall somewhere in between) will know what an Allard J1 and Ballamy suspension is, also the history of the Candidi Provocatores team name, and A.G.(Goff) Imhof will be as well known a name to them as Michael Schumaker and Colin McRae is to today’s motoring devotees.

The development of the Allard marque began in the 1930s when Sidney Allard AMIAE MIMT, an engineer and garage proprietor in London began building ‘Allard Specials’, (these are now extremely rare and sought after cars)  and were offered with V8 or V12 engines and advertised as The Car That Will Go Anywhere.  Sidney – The Guv’nor, even attempted climbing Ben Nevis in the first Allard Special, his own V8 powered car, CLK 5. In true trialling manner, he drove the car home after barrel – rolling it down the mountain!. OK, so there was an 1100cc Allard Special entered in the MCC Exeter and Lands End Trials in the early 1930s which apparently retired on each occasion, but you have to start somewhere!. 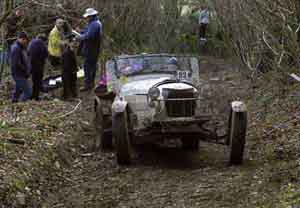 Pre war, the Allard Specials were quite successful in most disciplines of motor sport and attracted the useful drivers of the day into the cockpit. Look through any of the motoring publications of the time and invariably, Allard will be a recurring name in the FTD, Outright or Gold summaries.

The war years saw Sidney’s works modifying and repairing mainly Ford Military vehicles for the cause, and in 1946 when the conflict ended, he was well set up with virtually unlimited spares to commence building the Allard car. The white V8 car that you may have seen on the hills in recent years was indeed the first Allard car to be so badged, and was one of the twelve short chassis competition cars known as J1s. All the J prefixes were competition cars, the J2 and J2X  (even Dick Barton, Special Agent had one of those) quickly followed.

Our J1, chassis no. J1 106 and registered KLD 5 has been in the guise as now seen since 1947 but on her original registration date of 28th. August 1946, she was registered HLP 5. The owner and driver of the car was Godfrey Imhof, a London entrepreneur who owned the HMV (His Master’s Voice) shop in Oxford Street amongst other business interests. (Could the Allard Motor Company have been another?)

One of the first outings of J1 106 was the Cavalcade to the Continent as the Allard Factory Demonstrator. During the trip, Imhof and his wife Nina heard of a concourse d’elegance at Ostend and made a quick dash from Paris to the Belgian event and after a quick clean and polish of the J1 at a local garage, duly paraded the sparkling Allard in front of the panel of judges. One particular judge was most attracted to the then smooth lines of the car and it was duly awarded the Grand Prix and Silver Cup. Imhof was offered some two and a half times the basic price of a J1 for the car, but she meant far more to him than the extra francs, and he had other more interesting plans for the car. Who was the judge and gent so interested in the J1?. None other than the eminent entertainer Maurice Chevalier.

The next stop for the J1 was a hill climb in Switzerland held on the Majola Pass, a climb of some 7 miles embracing 30 hairpins and raising 6,000 feet. The normally aspirated Allard was not particularly suited to such conditions and could only manage 12th place. On returning to England the J1 was prepared for the forthcoming trials season and together with Ken Burgess and Jim Appleton driving similar cars, the Candidi Provocatores team name was revitalised. The ‘White Challengers’ name was carried by Singer and MG pre-war. The other Allard team at the time was the ‘Tailwaggers’ and driven by Hutchison, Warburton and Price.

Following a successful trials season, the car was then prepared for the ‘Grand Rallye de Lisboa’ to be held in May 1947. Some 173 cars were entered for the Portuguese Rally and partnered by Ken Hutchison, Imhof and the now 3.9 litre supercharged J1 set off  to his chosen start at Brussels for the 1600 mile high speed chase through Paris, Bordeaux, San Sebastian and Oporto to Lisbon. Keeping a steady 70 to 80 mph, the white Allard won the event outright securing the Premier Cup and a cheque for £300!.  Two further sprint tests in Lisbon saw the J1 record the fastest two runs of the whole entry.

High from his victory in Portugal, Imhof was intent on improving his 12th. position in the previous year’s Majola hill climb and complete with Dunlop racing tyres, a powerful Marshall-Nordec supercharger and huge cooling fan, the J1 again set off to Switzerland. This time, Imhof completed the course in 8 mins. 57.2 secs. establishing a new sports car record for the hill.

Towards the end of 1947, the J1 had lost most of her concourse bodywork and was now a true mudplugger but following a heavy coming together with a stone wall on a trial in Derbyshire, the car was returned to the Allard works and re-bodied as she is today with cycle type wings and a light aluminium body and for some reason, was re-registered KLD 5. Some material gain for Mr. Allard one presumes.

The success of the J1 Allards in trialling was unparalled and the governing body of the sport decided that rules needed to be changed to give other competitors a more sporting chance. (Where have I heard that before?).  Imhof was never one to bow to authority and when the rules were not to his liking, he would modify the car to the extreme and at one point there was a further 3’6″ overhang at the back with an extra seat for another bouncer. When this poor chap did bounce, the front of the car would lift a couple of feet off the ground but this did not deter Imhof in his quest to reach the summit – the supercharger would still be screaming and the valves bouncing!.

The car was finally retired by Imhof in 1949 (she was still less than 3 years old), mildly trialled for a couple of years then passed through a few hands until Gay Greenwell bought her in 1988. We borrowed her from Gay in 1992 to drive in the Allard 40th. Anniversary Monte Carlo Run (to celebrate Sidney Allard’s outright win in the 1952 Monte Carlo Rally) and after a 2,500 mile test drive, we bought her.

We have tried to keep the car much as she was in 1947 but we have succumed to radial tyres. The Achilles heel of the J1 is the Ford pre-war, 3 speed, top change gearbox, but we have one spare in the garage. At 13 mpg, the 34 gallon tank is useful but when there’s only about 10 gallons sloshing around in the bottom, it’s time to fill up again.

I hope the next time you see a white Allard with red wings and Candidi Provocatores, Driver A.G.Imhof  and No.1 Team Car written on the side of it just as it was in the 1940s, you may be a little wiser to the history of this unique motor car.