A Curate’s Egg by Pat Toulmin

It is 15 years since Jonathan and I did a Clee Hills Trial in our Marlin. The last Clee under the VWOC banner was in 1992 and the first MAC Clee, organised by Jonathan was in 1994. We did have a go in Simon’s Buggy four years ago when it was Simon’s previous turn to organise the event, as the Marlin was off the road awaiting its 2 ltr Montego efi engine. So it was very interesting to see how we would get on. 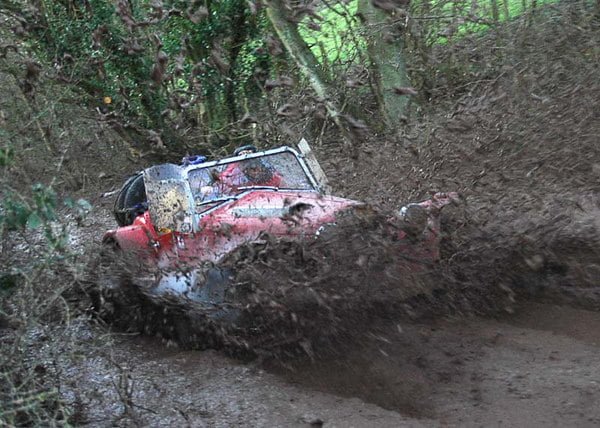 We haven’t done quite as well as we thought we might with the new engine, although it does have excellent torque and chatting to other drivers it appears that ballast is now the order of the day, as sections for class 7 have become more difficult and in many cases we now have the same sections, restarts etc as the specials in class 8. So part of the preparations for the Exeter was to lighten the front of the car and to move some weight backwards, rather than just add ballast..

The Clee had attracted its usual high number of entries, with a good vintage class, although no Bugatti this year and a strong class 0 (invented by Jonathan in 1998  for those who wish to take things a little easier than in the main trial) The start was at the Craven Arms Hotel as usual and we were running with our friend Tony Branson, but for the first time he was to take the passenger seat of his Marlin. His son Hal was doing his first classic trial as the driver! Tony would be learning the joys of reading a route card, but I didn’t have to bother all day – Jonathan knows this part of Shropshire extremely well – I wonder why…..?

Our first hill was a new one this year, Flounder’s Folly and this was adjacent to a hill and special test Jonathan had used in 1994. There was a bit of a queue when we got there, as the marshals were rearranging the start. Class 8 had been struggling and so for the lower classes it was decided to give them a run at it. Julian Fack, acting as a Steward was here and he didn’t think the lower start line made much difference. Certainly the hill looked easier than it was. There was a hump near the 10 marker which I guess took a lot of speed off? We watched others in class 7 mostly get 9s and 10s and then it was our turn. Perhaps a little prior knowledge helped – a 4 and the best in class. An excellent start, but a curate’s egg is only good in parts……….

Longville was next and unfortunately we failed the restart, perhaps we had been lulled into a false sense of security by Carlie Hart, who was marshalling on behalf of the Bristol Motor Club. She told us that most Marlins were getting up.

Easthope Woods were next and Easthope 2 was the first of two sections here, marshaled by John and Judy Fry of MAC and the MG Car Club. Most people were getting around 7, as it is very steep and there is a difficult left hand bend. After watching a few attempts Jonathan tried charging it at high speed in order to do a ‘wall of death’. However, despite fitting quicker steering arms, the car didn’t steer at all and we ended up beached on the bank for a 10. There was a queue for Easthope 1, as most people were attracted into a ditch near the top, between the 3 and 5 markers and it took some time to get them back onto the track and then they had to reverse back down. We set off thinking that we would also suffer the same fate, but no we cleared it. Only one other class 7, Julian Lack in his Marlin, was to also go clear. Curate’s egg equal?

Harley Bank 2 for classes 7 and 8 only was next on the menu and I’m afraid I can’t remember much about it, except that Claire Oakes got us to pose for a photo at the bottom. I have seen this photo on the Classical Gas website and the car looks remarkably clean at this stage…. Keith and Claire got a 9, but we managed to edge a little higher for an 8. Harley Bank was cancelled due to a Morgan 3-wheeler getting very stuck on Harley Bank I, so even if 8 was good in class 7, it didn’t count in the end.

Meadowley was the final hill of our first loop. The Clee is unique in running cars in two directions at the same time. It means that the trial gets everyone home in daylight and there are hardly any hold ups, but it does mean that you don’t see many fellow competitors. As we arrived at the hold control the heavens opened for a brief but heavy shower. Thomas Aldrian was sheltering in his tow car. He had entered the event in his class 7 Austin 7, but had gone down with the ‘lurgy’ and thought marshalling might be a better bet on the day. There was no one waiting at the section so we went straight up for a clear along with 50% of the class this time.

How was Hal doing on his first trial? No clears yet but he was doing OK and was up to par with most of the class, except on Flounders Folly and the Jenny Wind. I think he was finding it harder than he thought and certainly harder than the couple of PCTs he had done previously. We had ‘lost’ him at this stage and were then very surprised to see him come down the lane out of Meadowley without having seen him go up. Apparently they had failed the section but then gone up the lane instead of back down to the hold control, so Tony’s navigation skills were being tested. We were running late due to the hold ups at Easthope, so Jonathan decided to use his local knowledge again and cut across country to Church Stretton, and up the Burway with its sheer, unguarded, drop on the right and over the Long Mynd to the special test at Ratlinghope – a pre-war section. Then just a mile to Phil’s Folly. This was marshaled by George Shetliffe and his colleagues from the VSCC. The lower classes had a run at it, but we had to climb a short steep bank and then make a very tight right hand turn onto the track. We oh so nearly didn’t make it as our wheels were approaching a tree stump on the left, but the new steering arms paid off and we scraped round. At the top we waited for Hal and Tony and I have photo of him with Phil Harding’s tank in the background – quite a sight. Here Hal’s PCT experience was to help and he also cleared the section, as did the rest of class 7, although it did catch out a few of class 8.

Gatten’s Gamble and Allez ‘Oop were straightforward and the views at the top from the latter were spectacular. For the first time we had been allowed to use the track from the top of Allez ‘Oop to the Prior’s Holt plantation where there were three sections. It was a scenic but windy drive, almost too windy to enjoy the views. Jonathan had wondered whether anyone would get lost and end up at the gliding club instead, but I think all was well.

Prior’s Holt 3 was not a high point for us. There were a series of restart lines on a steep rocky slope and they were a little confusing and this wasn’t helped by the fact that someone had stolen some of the class boards before the event. Jonathan was so concerned about stopping in the right place that he wasn’t going fast enough and we failed to get to our restart line. Hal and Tony saw what happened and they decided that it would be better to over shoot the line and at least get up. As it was they stopped in the right place and got off – well done Hal.

Prior’s Holt 2 didn’t bother the scorers much, with most people going clear, but Prior’s Holt 1 was a different proposition. Three in class 8 and Derek Tyler in our class in his Baja Beetle cleared it in the afternoon. We were hoping to do OK here as it was marshaled by the MAC, namely Dave Ball, Dave and Rachel Whitefoot , Richard Warner and Dennis Reynolds. We tried our best and with much encouragement from Dennis managed a 4, second best in class. In the morning it was cleared by Adrian Dommett in his class 2 Wolsley Hornet and the new rising star Emma Robilliard in her class 4 Beetle. Emma isn’t 21 yet and is currently leading the ACTC’s Crackington League with 3 class wins so far this year. It is her first year of driving, having previously been in the navigator’s seat.

The final fling of the day for us was Round Oak and the order of the day was mud and more mud and some very deep ruts. Clerk of the Course Simon was here and we watched Hal get an 8. Not fast enough said Simon, so Jonathan went for it – so much that I very nearly got thrown out. We made the 5 and so also had to bother the Rover Recovery Club for a tow. We just grounded. Two drivers in our class cleared the section – class winner Derek Tyler in the VW Baja Beetle – no surprise with its very tall suspension and John and Sue Ludford in their Marlin – well done John!

So the verdict – a curate’s egg indeed for us, but a most enjoyable, challenging and scenic event which finished in daylight – well done Simon Woodall and all the marshals and officials – no wonder its is the most popular one-day trial of the year.