THE 74th EXETER TRIAL from the eyes of first timers by Ben Brymer, with help from Kevin, Tom and Jason

Being collected at 22.00hrs for a trial was a bit of shock to the system but off we went to Okehamplon for our early morning start in the trusty Chrysler. Scrutineering was a breeze and then to signing on and breakfast ! or was it supper? It had been a long time with last years lay off but all the regular faces were there making it a real social event. The next section was possibly the worst of the whole event with just the waiting around, being allowed over 5 hours to travel 102 miles 2nd scrutineering and 1 hour’s breakfast.(There must be a reason for this).

It was day light before we saw the first section, Gatcombe lane was a nice ice breaker just to get us going were on to Normans Hump. Seeing a few fails in front of us it was a daunting sight but to our amazement the old Chrysler climbed to the top with little effort. Round to Clinton were another clean climb though loosing the exhaust system half way up. After some repairs rolling in the mud and a ratchet strap placed round the exhaust coming through the car to the seat frame we were off again and on to Waterloo with another clean climb. The exhaust was getting worrying by the time we got to Sidford a friendly garage was found were for the exchange of a trip to the pasty shop we borrowed a welder and was not long before we were on route to Stretes, Bulverton Steep, and Passaford – all nice sections with no real dramas.

Body and vehicle refuelling was next at Exeter Services were the 1hr break was an ideal time to have a look at some of the other vehicles that were ahead of us and to try and enlist some entries for the Exmoor trial. Our first fail of the day and first hold up, Tillerton Steep. Having taken a good run at it the rock slab was just too much and we just got caught on the edge. That’s one to blame on the weather as it changed to a light drizzle as we were waiting to enter the section. Fingle Hill was a bit sneaky just when you think it’s over and start to back off it starts again, but another clean. Wooston Steep the Chrysler loved, she bit in well and just seemed to fly up. Perhaps some enthusiastic arm waving and shouting from some marshals being members of our club helped. 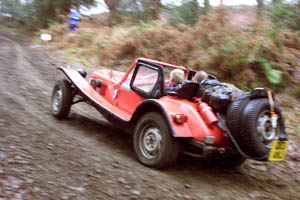 SIMMS !! We arrived to a bit of a hold up that had been caused by a Dellow coming down the hill faster than they went up, Thankfully all were well in what could have been a really nasty accident in such a tight space. Obviously the crowds were large on the hill as you could hear the cheers and shouts over the sounds of spinning wheels and valve bounce. It was dark before we got to the start line, but at last we were going to see this hill. On rounding the bottom right-hander the sight was amazing, A hill that just seamed to go straight up fined with hundreds of people all screaming and waving encouragement. It was to late for us we had gone to far to the left getting out of the tracks and getting bogged down, “I’ve come this far and now I want to finish” was the reason our driver gave for backing off early. One more section and we were on our way to a bronze. Tipley looked a piece of cake, but our excuse for a fail here was the MG Midget following us. Whilst waiting in the lane in the dark and cold doing the bit with the tyres etc there came a blood curdling cry and splash. The MG passenger had gone to answer the call of nature and had fallen in the river, by the time torches were in the direction of the splash a very wet body was seen making his way back through the bushes. So concentration was gone and we laughed all the up Tipley until we got caught on a rock slab.

We had signed off at the finish hotel and were trying to find our way out of Babbacombe when we were pulled over by the local traffic boys. After a brief exchange the true reason for the tug came apparent. “What car is it? ‘Cos my mate thinks it’s an Escort”. A Chrysler Avenger was our reply. “I thought it was” said the PC and shouted across to his mate in the car “I told you it was an Avenger”. I  suspect we earnt one of them a £5 bet!

A great event with a bit to much waiting around at the start being the only complaint. But YES we would do it again. Thanks to all of the event team and marshals.