Prologue
“Secure your place in motorsport history” said the advert, and who could refuse an offer like that even if we didn’t know what we were letting ourselves in for? So off went the thirty quid in early December last year when the May Bank Holiday seemed a very long way away with half a trialling season to complete first. Talking to competitors through the early season events revealed the complete range of responses from “I’m really looking forward to it.” through “Well, I might think about going.” to “I’d rather spend the money on a new set of tyres”. The regs arrived in February, and were dispatched by return, the following three months being mainly occupied by wrangling with Magic Holidays over the hotel and travel arrangements. Did anyone get the correct invoice first time?

I spoke to Jonathan and Pat several times and, during one telephone call, Jonathan admitted that he was worried the event would be too easy. “Don’t worry”, I reassured him, “no one cares about the trial, we’re only going for the holiday” (Typical of the level of moral support offered by one Marlin owner to another). However when we finally set off up the M5, in convoy with the Easterbrooks, the clouds parted for the first time in weeks and by the time we arrived in Liverpool we were all bathed in warm sunshine. And what a sight greeted us on the dockside! We were not the only motoring organisation eventing in the Isle of Man that weekend and the entire ferry holding area was crammed with vintage and classic cars as well as what looked like most of the trial entry. Everyone was in high spirits and it was a great party atmosphere when the ferry finally docked in Douglas.

Most people spent Saturday exploring the island including, as someone put it, the ‘obligatory lap of the TT circuit’ before arriving at the Cherry Orchard for scrutineering ably carried out by Alan and Hilary Foster despite grumblings from some competitors that it was all taking too long. Most took the opportunity for a lengthy gossip with friends and acquaintances, the impatient ones just wanted to get back to the bar. Unfortunately I missed most of this whilst trying to rectify a sudden overheating problem. Removing the failed thermostat affected only a partial cure, whereas dispensing with the fancy ‘rally style’ number board proved 100% effective!

The Trial
Although most of the pre-Trial formalities had been completed the previous evening, and we’d all had a couple of weeks to study the main route card, we weren’t presented with ‘Part 1’ until our departure time. As we also had to make amendments to the amendments to the route card this left most of us slightly puzzled as we set off up the winding A36 out of Port Erin on a beautiful, warm, sunny morning heading for Section 1, the Eary Cushin Special Test. Most of us managed to work out that 587 yards at 20 mph meant completing the test in exactly one minute and, suprisingly, well over half the field scored 5 seconds penalty, or less. 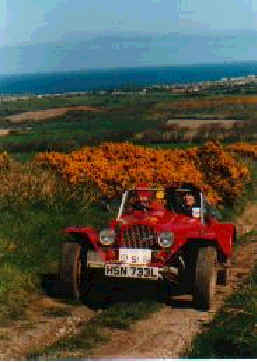 Section 2, Barnel Lane, was an easy climb up a stony track, cleaned by all except the unfortunate Clarkes in their Brescia Bugatti who came all the way from Ballymena to fail the first three sections and retire with low oil pressure (you don’t soldier on with an engine thatexpensive to repair). Section 3, Barrule Forest, brought us all back to reality with a bump and, effectively, decided the trial although we didn’t realise it at the time. An apparently innocuous track through a gateway into woods, the peaty surface offered zero grip to those without a feather-weight touch of the right foot. It was cleaned by 8 from Class 8 but only 9 from all the other classes combined. 22 failed to leave the start line and most who reached the restart didn’t get any further. So much for Jonathan’s “I think the trial will be too easy”! The nearby Barrule Quarry, Section 4, was cleared by all but a handful and Section 5, Penhale’s Puzzler Special Test, gave us our first opportunity for a timed blast around the quarry tracks. A short drive, a route diversion, and a holding control brought Classes 6 and 7 to Section 6, Ballig, which was cleared by all, the route out providing spectacular views west over Peel towards the Irish coast.

A few miles up the TT circuit, a right turn in Kirk Michael, and a steady climb up a poorly surfaced road to Section 7, Slieau, cleaned by all except the unfortunate Jack Windaybank whose Marlin was about to expire (albeit temporarily) with electrical problems. Slieau was marshalled by the senior Bartlemans who’d been persuaded by Paul to come on a ‘holiday’ and found themselves press-ganged into helping. As a reward, they’d been given the most spectacular view from a start line that I’ve ever seen on a trial – the entire northern half of the island was spread out below them in a panorama of hill, gorse, sun, and sea. A couple of miles of Byway and a few more of tarmac, including a descent of the old hill climb course, and we were at the Tholt-e-Will lunch stop where us lesser mortals could sit back and watch all but one of Class 8 blasting up Section 8. In one of the many last-minute route changes forced on Jonathan, he’d agreed to restrict the number of cars going up to keep the local landowner happy. A pity for the rest of us as it looked a good section.

The ‘lower classes’ were forced into a lengthy road diversion to the second set of forest sections, in the Ballaugh Plantation. The first of these, Section 9 Ravensdale, had an ominous notice, for those of us with eagle eyes, announcing that it had been cancelled for Classes 0 and 1. Leaving the tyre pressures just a little too high we had a spirited fight up through the ruts and rocks, the first really testing section since Barrule Forest. It defeated two thirds of Class 2 and one each from Classes 4, 6, and 7. Section 10, Hughes Hump, also in Ballaugh Plantation was the second ‘deciding’ hill with the White/Yellow/Red restart on a nasty right-hand hairpin catching nearly half of those who had to attempt it. All but one of Class 2 had the satisfaction of driving straight through the box and up to a clean. Section 11, Ballaugh, was uncannily similar to Haggside on the Edinburgh with a drive up through woods finishing in a set of hairpins onto open ground. Everyone went clear.

We now settled down to a long drive around the northern leg of the TT Circuit, through Ramsey, across to the A2, down the east coast through Laxey, and on via our amended amendment to Section 13, Noble’s Park. The Toulmins had elected to cancel Section 12 as ‘too easy and too prickly’ – there was a lot more gorse in May than when they’d recce’d the route six weeks before. Noble’s Park was another stony Byway track which didn’t stop anyone and lead us all back up to the TT Course. In another long road section we followed the Course down into Douglas, passing along the Start/Finish straight and out on the road to Crosby before heading across country and back to the Barrule Plantation. Section 14, Waterworks, was almost parallel to Section 3 but was very different in character with stones, ruts, and a lot of running water. It defeated all of Classes 0 and 1, a handful of Class 2 and, for some stilll inexplicable reason, this particular driver in Class 7. Section 15, the Deane’s Dash Special Test, was our second chance to blast around Barrule Quarry before setting off through the Plantation to Section 16, Cringle. Although looking slightly daunting from the start line once around the first corner it was apparent that this was a foot-down-and-grab-second-gear section for everyone except Class 8 who had to restart. From the top of Cringle we had a wonderful descent back into Port Erin at the end of a very enjoyable day.

So did the Toulmins succeed in their wish to create a ‘mini Lands End’? I think they did and provided us all with an excellent tour of the island on the way. There really wasn’t much left to see in the two days of Touring Rally that followed. Although a majority of the sections were ‘non-stoppers’ I feel that was entirely in the spirit of the event and, as a study of the results will reveal, it was only really in Class 8 that places were decided on the timed tests. The organisation and paperwork was up to the standard we’ve come to expect from the MAC/Toulmin team even extending to informing those of us with Orange mobiles, in advance, that they wouldn’t work on the island.

Epilogue
To finish off a splendid day, there was a proper Trial Supper that evening in the Cherry Orchard with results, a proper prize-giving ceremony, and even proper prizes! It was just a shame that the bar had to shut so early. Two Touring Rallies were laid on for the Monday and Tuesday and included trips around a local museum and a ride on the Snaefell Mountain Railway. However, even if you weren’t taking part it was impossible to escape other competitors who seemed to have spread out across every tourist attraction in the island. And finally, a really big ‘THANK YOU’ to Jonathan and Pat who put an immense amount of personal time and effort into making it a most memorable weekend. They’ve both sworn “Never again”, but the arm-twisting has already started.