It was with keen anticipation that the entry was sent off for the Torbay Motor Club’s annual classic reliability trial. Having been instrumental in organising the first Torbay Trial in 1987 this was to be our first time competing. The entry list, when received, showed an excellent entry of 76, almost a third of which were in Class 8 and large numbers in classes 3 & 7. The day of the Trial started dry and sunny and it was to a very busy and active scene that Dean and myself arrived at the Bickington start/scrutineering area. It was interesting to see a matching pair of Shoplands, a brace of Golden Valley Specials and a football team plus of Escorts making up Class 3, infiltrated by Dave Turner’s BMW. Dudley’s ever faithful supercharged MG J2 was in evidence and Phil Potter, who competed in the first Torbay Trial in a Trojan, was there in his smart light blue supercharged Dellow.

We were waved away from the start by Terry, ably supported by young son and daughter. Terry I’m sure, did not know at that time how critical a person he was to the eventual outcome of the Trial. As we drove along the high hedged lanes to the hallowed ground of Simms we discussed the best line to take. It is quite possible to fail a hill before you ever get to it and Simms can be one of these, certainly on this year’s Exeter it could have been. On that occasion as we approached we had received a lot of comments and remarks on its severity. To quote quite a few spectators experienced triallists among them, “Nobody is getting up but the right hand side seems to be best” The right hand side! The right hand side was always taboo, there was only one way up as far as we were concerned and that was straight up the middle keeping to the ruts (because if you didn’t you always fell into them anyway). With that thought in mind we arrived at the hold control before proceeding down the escape road to the foot of Simms. There was a delay as the Stilleto of Jim Scot, which had suffered a mechanical failure, was recovered. With time to contemplate and enjoy the mild sunny weather we reaffirmed the line to take. When our turn came we were waved off the line by Angus and made a straightforward climb to the top on a wet surface which provided plenty of grip. Quite an anticlimax after the Exeter.

Lower Dean was next after a detour along the A38 due to the replacement of its worn out surface. Lower Dean always looks very forbidding with its rough rock surface, which carries on right to section ends. The restart for classes 6-8 was on a very uneven rock surface just before the right hand cutting. It was tricky and needed accurate placement to achieve a clean getaway. The Metro Turbo in class 1 took one look at the stepped rock slab from the start line and decided to just put its front wheels over the line to take a 6 – good thinking and interesting as the results showed a clean! Baddaford Lane has changed since the trial first ran. No longer is there deep rutted mud where the steep part of the lane ramps out on to the wider part. It was the wider part that had less grip on its wet muddy surface than the main hill with its harder surface. The restart for 7 & 8 caught out a few notables such as Phil Potter and Chas Shopland. P Evans in the twin Shopland retired here along with Perce Harden in the Midget. The route took us back along the A38 dual carriageway to the Teign Valley, where the approach to Stewarts Special Test was down a very pretty lane alongside the river Teign. The special test was a straight forward / reverse affair on a farm drive overshooting the line. 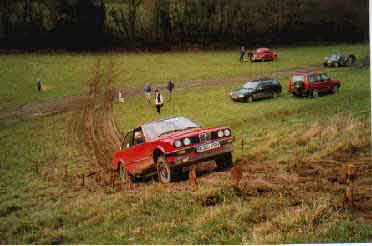 Richards Rise was a PCT type stepped grass bank turning to mud with plenty of grip for the more competitive. We bunny hopped out of the top having maintained a fair speed after a level run in. Roger in the Vincent surprisingly dropped a 1, perhaps life would have been more interesting if the minimum tyre pressure limit quoted in the instructions, had not been dropped. Good climbs were made by Dave Hazleden in the Golf, Bartie in the Escort and Phil Mitchel in the Skoda. The farmer who was enjoying the spectacle thought it all too easy and was going to make it more difficult next year. I heard later though that he had declined a ride up the bank with Workie in the GVS – probably thought his tractor safer.

John Grant’s Lane was an excellent classic section. The surface was hard and stony with plenty of grip. The restart area was quite rutted and sited immediately around a tight right hand bend, the lock on the Marlin just making it, Dave in the BMW found it a little too tight. We did admire and envy his posh rally seats when he pulled up behind us at the top – Tricia remarked that it was like being out for a Sunday jaunt. Sunday jaunts were about to change as the next section was Waterless Lane, quite a misnomer. When we arrived at the section it was packed with competing cars right back to the tarmac road. The course opening 4×4 had broken down and considerable time was spent getting it out, Roger and Annie in the ex Imhof Candidi Provotatores Allard went through OK as 1st car but then Bartie who had a good a chance as anybody at getting out, stuck fast at 3 and extraction became a major operation. The lane has little gradient having a mild down hill mud rutted approach to the lowest point but this is where the problems begins, perhaps the name should be changed to Bottomless as it is very wet and boggy, OK for the Allard with big wheels and good ground clearance but no good for anything else bar possibly class 7 & 8 cars. With the approach lane becoming grid locked there was no alternative but to cancel the section. This changed the whole running order of the trial and we became for a while second car behind the Allard.

It was a very windy drive across the Haldon Moor above Ashcombe. The west wind blowing straight from Dartmoor over the high ridge and out into Lyme Bay. The holding control and snack wagon were relocated to the Teigmouth side of Shaldon Bridge, but some competitors ignored the amended location and went straight to the Ness Car Park and Shaldon prior to the next section, Commons Old Road. The hard surface of the old pack horse lane proved more slippery than it looked, but only saw three failures out of the whole entry, one being Andrew Brown in the 1800 Marlin who, I guess, got caught on the restart with a misfiring engine.

Higher Shells was the first of two hills at Higher Rocombe, it is a good short sharp steep section ,with a pinch at the end but no restart as of past years, and only one car in classes 6-8 failed. The second section was old faithful Slippery Sam and the main problem here was trying to dodge the restart marker placed in what seemed to be the middle of the track, immediately after the right hand hairpin. The entire entry bar five cleaned without problems to enjoy the liquid red Devon mud bath, which was as deep as usual. On the drive out to the edge of Dartmoor for the remaining three sections the weather deteriorated and from therein it became very wet and wild. Tipley was in excellent form, there were different restart lines for the two groups 3-5 and 6-8. Each was difficult on the wet stepped slate surface and deteriorated as the trial progressed. Greg had his work cut out to keep everything moving. Some notable climbs were made in particular Nigel Moss in the Cannon who, with a do or die effort, unstuck himself from the restart to successfully climb out of the section. The bad luck story was Giles who had an off the rim puncture.

The level exit lane from the top of Tipley was witness to special Test No 2 which was a good forward / reverse / forward blast on a hard surface, Terry was in critical mode operating the three button digital stopwatch to record FTD by Workie at 20.15 secs. and an excellent time of 21.04 secs by Terry Coventry in the FWD Class 1 Citroen. Old Town Wood, a good classic section with a hard stony/rocky surface, created little problems and then it was to Simms for the second time. Even though the hill was now in excellent form, with rain giving a greasy surface to the hard uneven slate base, it only produced four less failures than the first time around. Bartie gave a spirited climb in the Escort, power sliding around the right hander in fine style to speed to the top. Adrian in the Alfa engine VW Baja stormed to the top from the low down restart on the right hander.

The Results showed nine cleans – the first 5 covered by 0.71 sec. Nigel Moss won overall by 0.19 secs and second place was won by 0.02 secs. How close can you get! By the way, the line we took on Simms on the Exeter was hard right, luckily we got away with it. Later we heard that Roger in the Vincent went up the middle to a clean and Greg in the Anglia Estate went hard left for another excellent clean! I will leave you to draw your own conclusion on what is the best line! Thanks must go to Torbay Motor club and its dedicated band of organisers/officials and Marshals for providing an excellent day’s motors sport with good start and finish venues.